SumnerOne History: The 1960's to the New Millennium

When we ended our last SumnerOne history lesson, the year was 1955 and Bud Sumner had moved back to St. Louis and purchased A.B. Dick Products of St. Louis, Inc. The decision to move back to St. Louis proved to be strategic and smart decision for Bud. More than 60 years later, our headquarters is based in St. Louis.

The years between 1960 and 2000 were pivotal years for SumnerOne, bringing about new technologies and rapid growth. Join us as we take a look back into our company history and go over the details that have made us who we are today.

If you want to strengthen your market power, take matters into your own hands. That's exactly what the Sumner family did in 1962 when they established Sumner Realty. The launch of Sumner Realty opened the door for the leasing branch of our company. Offering in-house leasing options to our customers is still something we offer today. Bud Sumner was making moves back in 1962 that still impact the growth of our company decades later.

Another huge thing happened to our company in 1969, was that we began specializing in copiers. Move over mimeographs, the copier was officially a fixture of our offerings as a company. We are still an organization that specializes in copiers, among many others things to this day. The copiers of today may have a lot more functions, but we've stayed true to our commitment to offering the latest and greatest technologies available.

1970's - Minolta and the Age of Copying Concepts

The 1970's also brought about another bit of growth for our company. In 1975, Copying Concepts was established as a Sumner Group Company. Businesses in the Greater St. Louis area came to recognize Copying Concepts as a trusted partner and key player in the area for office technology.

In efforts to diversify Sumner Group offerings in the 1970's, Copying Concepts became an authorized vendor of the first "plain paper copier" for Minolta. Minolta didn't add the name Konica until the early 2000's, but even so, we are still a proud Konica Minolta dealer to this day. We have even been named a Konica Minolta Pro-Tech Partner for and have won the award for 24 consecutive years. Providing our customers with great service has always been at the heart of our organization. Regardless of which vendor we are working with, we are committed to providing our customers with the best service the industry has to offer.

The only thing bigger than the hair in the 1980's was our company's drive and ambition to keep growing. In 1980, A.B. Dick Products of STL, Inc. was renamed Datamax. Along with Copying Concepts, Datamax continued to grow as a key player on the St. Louis business scene.

We said the 1980's were huge for us, and 1981 was no exception. Sumner Group, Inc. was established that year and would become the parent company of all our divisions for decades to come.

We also began selling equipment from Canon in 1981. The Datamax branch of Sumner Group became the official vendor for Canon products. We proudly still carry and service Canon equipment. In recent years, we have been named as a Canon Advanced Partner dealer for our commitment to service. Less than 10% of Canon authorized dealers qualify for this honor! Our commitment to customer service has always been the heart of our organization.

In 1985, Copying Concepts moved into the historic Scullin Steel Co. building on 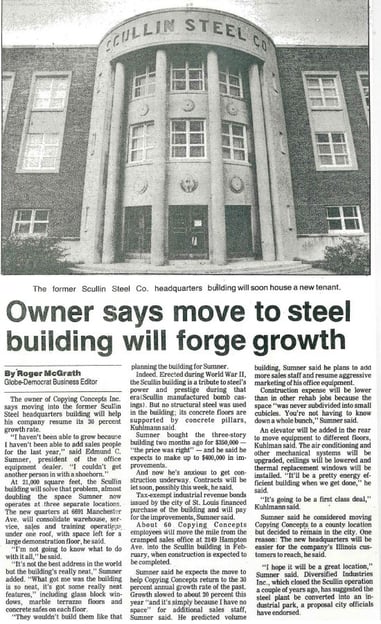 Manchester Ave. on the edge of Dogtown. Before the building became part of Sumner Group, it was home to the offices of the Scullin Steel Company. For decades Scullin Steel provided the city of St. Louis with jobs producing iron and steel products used for the railroad industry. To this day, the original Scullin Steel name is displayed across the front of our building.

Fun Fact: In the main lobby of SumnerOne's Manchester location, there is a giant "S" in the marble floor that once stood for Scullin. The Sumner family elected to keep the flooring because the "S" works for the Sumner name too.

The 1980's were a decade of growth and building, which would continue to lay the foundation for Sumner Group and guide the company on the path to becoming the largest family-owned office technology company in the Midwest. 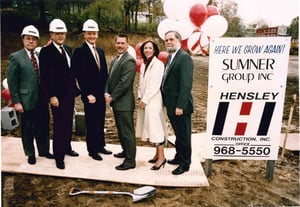 "Here We Grow Again," has been a commonly used phrase for us when big changes are ahead. It's been used in blog titles, press releases, and at the groundbreaking ceremony for the Datamax building in the early 1990's.

In 1993, our second office and warehouse facility was built on Waldemar Ave. The location for the new building was right next door to the office on Manchester Ave. Throughout the 1990's and early 2000's the location on Waldemar was used for Datamax offices and the Manchester building was used for the offices of Copying Concepts. These two companies acted as two separate entities both owned by Sumner Group until they became one team in 2018.

The 1990's were a great decade in which big moves were made that would catapult SumnerOne into the forefront of office technology in the Midwest after the turn of the century.

Understanding our past has made a lasting imprint on where we are headed as an organization. It's the story of how a service technician turned war hero went on to build a lasting legacy upheld by three generations of his family. SumnerOne has heart. We are a family-owned business at our roots and that is exactly how we went on to tackle the early 2000's and beyond.

The next edition of our history series will cover the past (almost) 20 years of our company, introducing new services and technologies, our transition to the name SumnerOne, and our expansion across the Midwest. To keep up with our history series and others, be sure to subscribe to our blog below.