The First 30 Years of SumnerOne

Our founder, Bud Sumner, once said, "As technology changes, so does Sumner Group. We are not going to be a victim of not changing with technology." Bud made this statement over fifty years ago, and we've been running with it ever since.

For over Sixty years, we have been serving businesses in the Midwest by providing them with the technology they deserved to keep their business running with prime efficiency. When you've been in business as long as we have, you're bound to see some big shifts in technology and in business. Join us on a journey as we examine the first thirty years of our company history.

Bud Sumner began his career in office technology by taking a position with A.B. Dick as a service technician in 1937. He spent three years servicing equipment before hearing the call to serve in the US Army during World War II.

At the beginning of WWII, Bud was part of the 2nd ever class at OCS - Office Candidate School. Bud arrived in Europe on the 2nd day of D-Day. During his time in Europe, Bud served as a member of Patton's Combat Engineers, and was a leader of a special operation group known as "Patton's Ghosts" where he went beyond the enemy lines during winter in all white suits ahead of troops and lead the way.

During the course of his military career, Bud went from being 1st Lieutenant Platoon Leader of Patton's Combat Engineers to Company Commander. He earned a Silver Star after he and his team held a critical riverbank in German territory for two days without the scheduled support which had been delayed. Through his service, Bud played an instrumental role in defeating the Germans also earning a Bronze Star and Purple Heart.

Fun Fact: Bud was almost court marshaled for taking an amazing German motorcycle on a joy-ride during downtime and a gas shortage!

After leaving the Army in 1945, Bud returned to St Louis and A.B. Dick Company and worked his way up to becoming a regional sales manager.

In 1952, Bud jumped at the opportunity to purchase the A.B. Dick Distributor in Oklahoma City and moved his family south. This was the very first step that set the Sumner family on the path to becoming the largest family-owned office technology company in the Midwest!

Not only was 1952 the year that Bud Sumner purchased A.B. Dick, it was also the year that the company began specializing in Mimeographs, "Photo" Copiers, and Spirit Duplicators! That was a big year for the company as they began to move forward by means of staying up-to-date with the latest technologies available to businesses of that time. During his time running the Oklahoma City location he tripled revenue in just three years!

In 1955, Bud Sumner purchased A.B. Dick Products of St Louis, Inc and returned to St. Louis. The return to St. Louis would prove to be a strategic move in the evolution of our company. 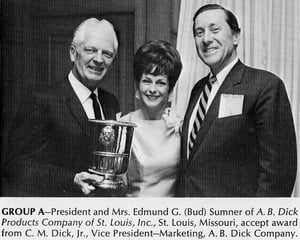 It's been said that in order to know where you're going, you have to know where you began. That saying holds true for us at SumnerOne. Bud Sumner laid a foundation of growth for our organization beginning in the 1960's and continuing all the way to 2018 and beyond. Bud knew from the beginning that we needed to change with technology in order to stay relevant in our industry. As our customer's needs have changed, we've adapted to the changing environment of office technology to evolve into the one place where technology and people come together to accomplish great things. Through our customers, our employees, and updated technology offerings, we have been able to achieve just that.

Stay tuned for the next installment of our SumnerOne history series. For more updates, be sure to subscribe to our blog to stay up-to-date on the latest at SumnerOne.