HOW TO GO ALL MACGYVER ON (FIX) THAT PRINTER JAM

As technology has improved, the relationship between a sheet of 8 ½ by 11” paper and the mechanical guts of a printer has become more and more like an old married couple. Most days, they get along beautifully and there isn’t a single concern or disruption as they go through their daily routines together.


However, every once in a while, the peaceable routine comes to a jerking halt. One half of the couple agitates the other half by, say, not re-filling the toilet paper roll, and the usual smooth hum of the marriage operation turns into a heated battle about Charmin.

In office technology terms, it’s hard to say which half of a simple paper-and-printer operation is to blame for a jammed printer – was it the torn corner of the paper that had a staple ripped out before going into the feeder, or was it some ornery moving part of the printer that tanked an otherwise normal print job?

We decided to ask our own team of MacGyvers, our SumnerOne service team, about the best ways to avoid and clear a paper jam. Here’s what they had to say:

1. YOUR PAPER IS SENSITIVE. Although a ream of paper looks like a sturdy and steadfast brick that can withstand some abuse, it’s actually quite sensitive. Especially during hot and humid weather, paper will absorb moisture and can warp and curl. Your office may cut the air-conditioning at night, letting stored paper marinate in the warm, humid air. If there’s a cooler spot in your office that is less subject to getting warm and sticky in the summertime, such as a climate-controlled server room, that’s the best place to store your paper.

2. YOUR PAPER IS ALSO TOUCHY. To perform at its best, any printer or multi-function device needs properly-loaded paper. The proper technique is rarely taught in a typical office environment, but a few extra seconds loading paper can yield huge savings in time and aggravation! Just follow these steps:
• Make sure the side and end guides are in place and appropriate to the paper size
• Fan the edges once like it’s a stack of fresh hundred-dollar bills
• Place the stack neatly in the tray
• Don’t overfill the tray – if pages move as you try to close the tray, you’re overfilling


BUT IF A PRINTER JAM DOES HAPPEN, FOLLOW THESE EASY STEPS

1. CUT THE JUICE. MacGvyer might bring a metal paper clip to every challenge, but things that conduct electricity, like small metal objects and human skin, tend not to go well with electrical-mechanical devices that are plugged in. To be on the safe side, don’t bring any of your own tools to this party-jam. If the printer appears to be very hot, it’s a good idea to turn off the device and let it cool down for a few minutes before clearing the jam.

2. FOLLOW THE PRINTER’S ADVICE. Nowadays, most printers have on-screen tutorials and/or help guides to aid you in effective jam removal. These tutorials will usually go something like this:
• Open this door. (Section of printer highlighted and blinking on the screen.)
• Good job. Now open this door.
• Flip this lever. (Lever will be a very bright lime green or similar color inside the device.)
• OK, here’s another door to open.
It’s best to follow the directions and not skip ahead. Printer manufacturers have all given a lot of thought to where a paper jam might occur and have designed their machines to allow novices to solve the problem.

3. GET A GRIP. A good way to turn a nearly-solved paper jam into a full-blown service call is tearing paper as you try to get it out of the printer. After a series of door-openings and lever-lifting, you’re very likely to see the jammed paper. The levers often release tension, making the sheet easy to remove. However, remember how you accessed paper towels before most public restrooms switched to the “hand wave” sensor: USE BOTH HANDS. Try to get a firm grasp on the sheet using your fingertips and pull slowly in the direction that the paper wanted to go in the first place, versus sideways (straight toward you).

4. SLOW AND STEADY WINS THE RACE. Whether following the on-screen tutorial or just making your own way through the doors and levers, it’s a good idea to take your time. Printer innards can still be hot, even if you have allowed for a cool-down period. A sliver of torn paper left after yanking away a stuck sheet can set off a cascade of bad ideas, like going after an out-of-reach sliver with a colleague’s pair of tweezers or masking tape twirled around the end of a pencil. MacGyver would not approve.

Still having trouble? We're here to help in a jam! Contact our experts at SumnerOne to help with all of your jamming needs! We're experienced in helping to solve printing issues. There isn't a problem or a question too small or too large for our team to solve! 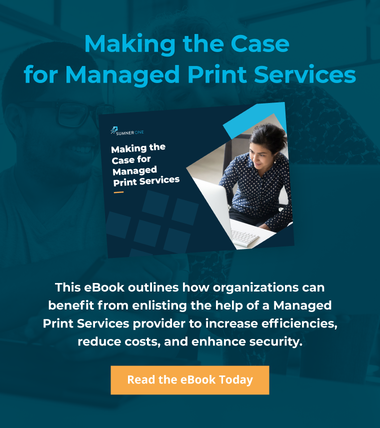