Through their Managed IT solution and unparalleled customer support, SumnerOne helped Schuchat, Cook & Werner survive a ransomware attack and restored their business operations.

Download a PDF version of this case study by filling out this form, or keep scrolling to read. 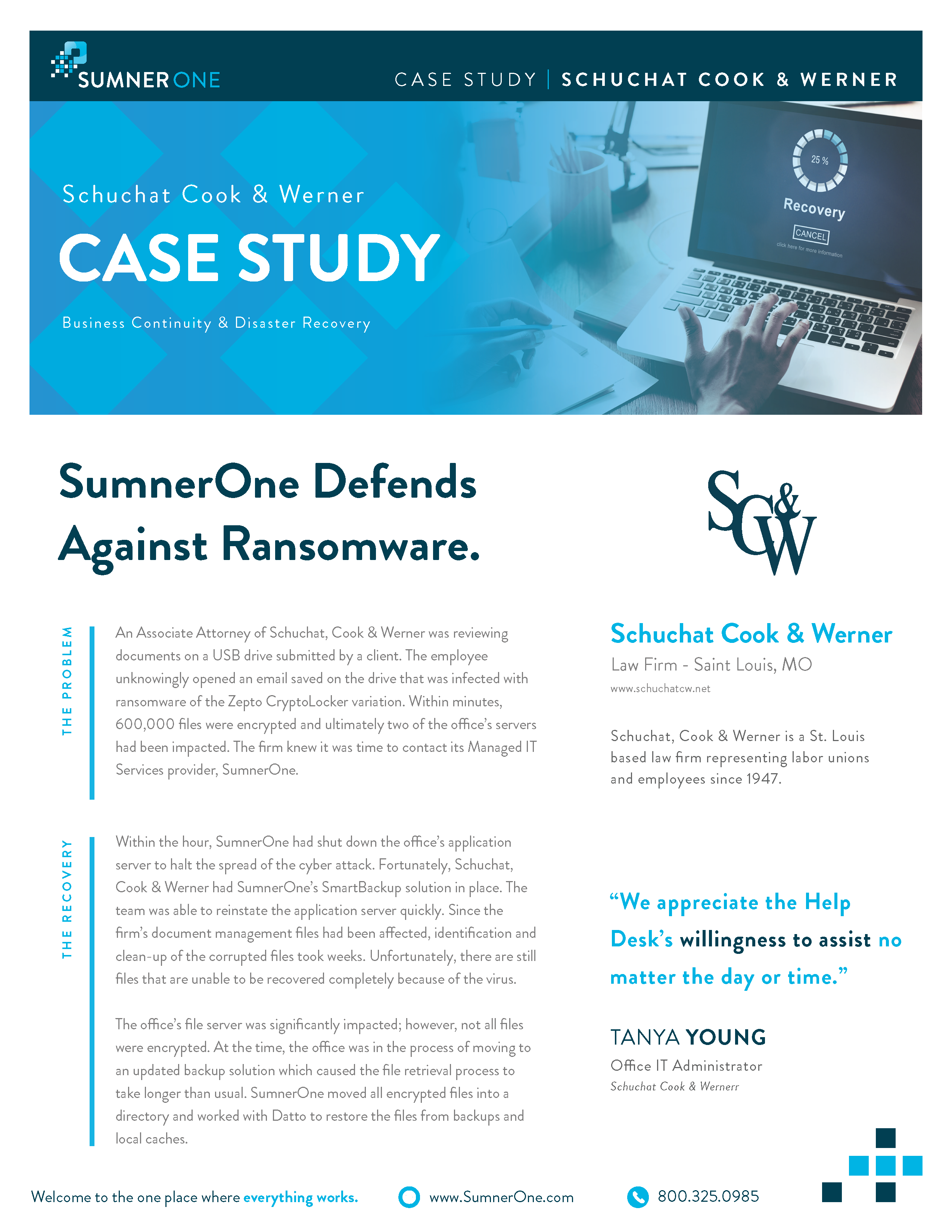 During the summer of 2018, an Associate Attorney at Schuchat, Cook & Werner was reviewing documents and emails saved on a USB drive that was submitted by a client. Upon reviewing the documents, the attorney opened an email that was infected with ransomware of the Zyptocrypto Locker variation.

Ransomware is a type of malicious software that blocks access to a computer system or data, usually through encryption, until the unsuspecting victim pays the ransom to the cybercriminals. These cyberattacks are growing in popularity and have affected many companies across the globe.

It didn't take long for the office of Schuchat, Cook & Werner to realize their files were under attack. The firm contacted their Managed IT Provider, SumnerOne, within minutes to determine precisely what was going on and how to rectify the issue. Office IT Administrator, Tanya Young, said that the office was panic stricken. At the time, they were unsure of which files had been encrypted, how the attack started, and if the firm would be able to continue normal operations.

Within the hour, the team at SumnerOne was remoted into the network at Schuchat, Cook & Werner. In that short time, the ransomware attack had spread like wildfire. 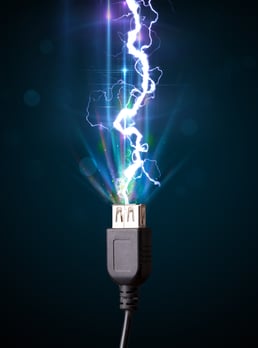 Within the hour, the team at SumnerOne remoted into the network at Schuchat, Cook & Werner. In that short time, the ransomware attack had spread like wildfire. The aggressive attack impacted two of the office’s servers and over 600,000 files. The firm’s application server had been damaged beyond repair, but their file server was able to be salvaged.

SumnerOne’s IT Experts jumped into action and operated with all hands on deck to help the law firm.

The team began by shutting down the office’s application server to halt the spread of the cyberattack. The backup system that Schuchat, Cook & Werner had in place was a Datto Business Continuity & Disaster Recovery solution. Restoring from the most recent backup, which occurred just hours prior to the attack, the team was able to reinstate the application server within the first hour.

The office’s file server was greatly impacted, however, the attackers did not encrypt all the files. At the time of the cyberattack, the office was in the process of moving to an updated backup solution which caused the file retrieval process to take about one week. The team moved all malware-affected files into a directory and from there, worked with Datto to restore the files from backups and local caches on Schuchat, Cook & Werner’s devices. SumnerOne was able to recover documents that were about two weeks old from the file server and completed a file level restoration on the data they were able to recover.

Business was able to resume to normal once the application server was reinstated. The hybrid backup solution that was in place backs up data locally each hour and replicates to the cloud once per day enabled Schuchat, Cook & Werner to be back up and running within the same business day as the cyberattack.

When this solution is in place and working properly while a ransomware attack occurs, the cloud backup system will afford the end user the ability to regain access to their documents and continue working as long as they have internet access. Once the SumnerOne team reinstated the application server, business went on as normal for the employees as engineers worked to reconstruct the file server.

The cost of downtime due to data loss is extensive. Implementing a solution like Datto’s Business Continuity and Disaster Recovery can be the difference in being down for minutes as opposed to days or weeks. Businesses run on data. A cloud backup solution is a businesses way of insuring the safety and ability to recover the documents that keep a business going.

After the attack had been contained, SumnerOne team visited the office of Schuchat, Cook & Werner to go over tips on end-user education and cybersecurity awareness. Training customers to be critical consumers in the workplace is a great defense when it comes to avoiding larger security issues.

A system like what Schuchat, Cook & Werner had in place is what enabled them to be back up and running within the same business day as the cyberattack.

Office IT Administrator, Tanya Young, said that their office enjoys working with SumnerOne as their Managed IT Services for many reasons. She stated that overall, Schuchat, Cook & Werner appreciates the approachable nature of the Help Desk and their willingness to assist no matter the day or time. Tanya said that she knows when their firm runs into an issue, the team at SumnerOne will be on the ball and ready to solve issues.

Is the Cloud Enough? Protecting Your Data Backups

Disaster Recovery: The Hero Against Ransomware

Disaster Recovery- Is Your Company Prepared for the Worst?

Simply fill out this form to receive a PDF version of our case study.